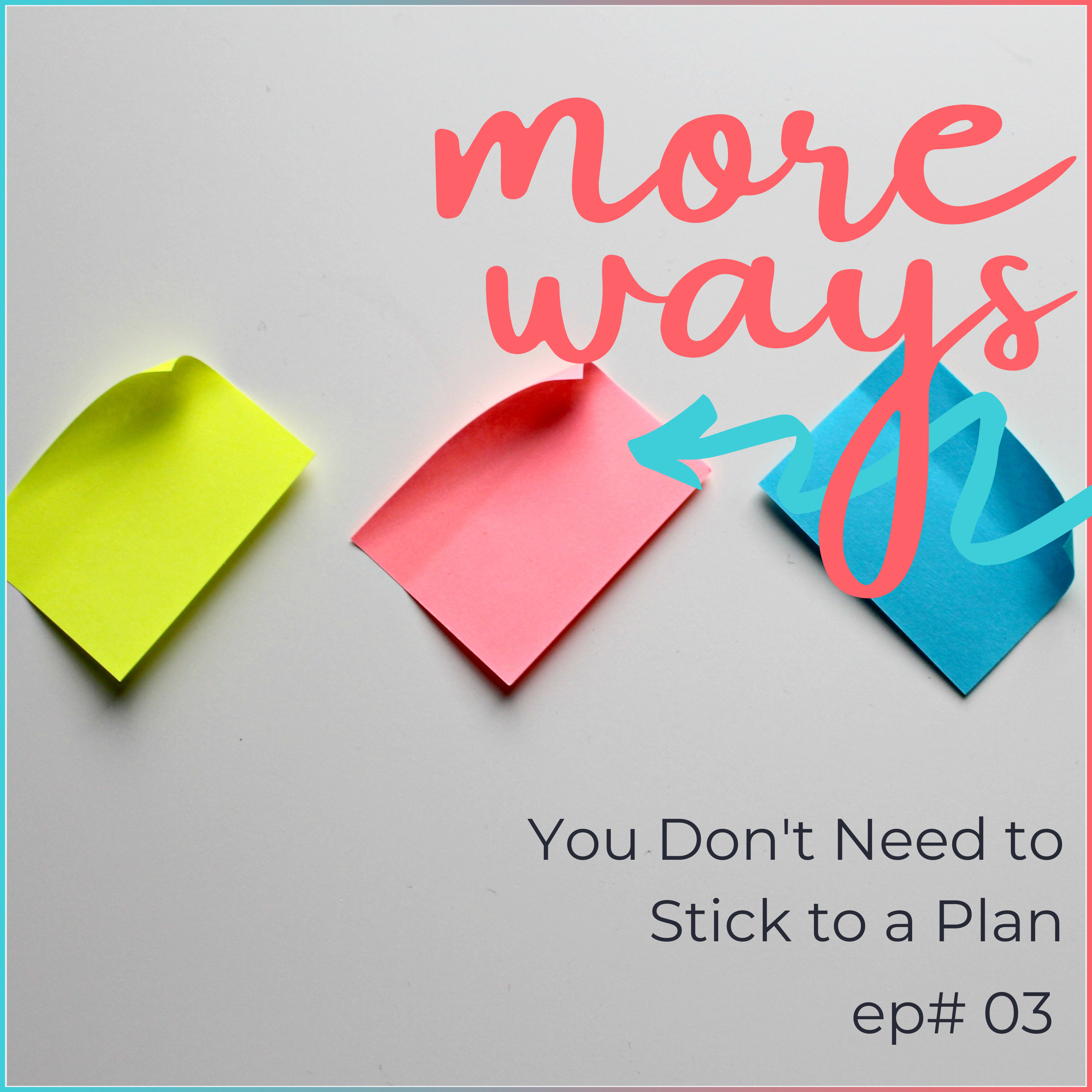 There seems to be an unspoken rule that you have to “stick to a plan” and today we’re exploring the danger of this belief and what it might be costing you.

Today I want to dive into a “sticky” topic. If you’re like many women I connect with, there is this unspoken rule that you have to “stick to a plan”. And I have to wonder where does this story come from?

You Do NOT Need to Stick to a Plan

In fact, I see women create a plan and if they carry around this idea about having to stick to it there are 2 different things that tend to happen.

If anything, I find that those who are cling to their plans with these vise-like grips are those that tend to suffer the most because they aren’t able to adapt. The fact is that things are ALWAYS changing. If you haven’t learned that in the last 18 months I don’t know WHAT it will take for you to take to embody that lesson. And because things are always changing, how you respond often needs to adapt, your plans need to change. And plans change through planning.

The Difference Between Planning and a Plan

Planning is an action, which makes it dynamic. A plan is static, it doesn’t change by itself. A plan can’t change unless or until you do new planning.

So, I think one of the questions I’m going to get (especially from my structure resisters) is “well, if I’m going to have to change my plans anyways then why even create them?”

And this question comes from a place of valuing the plan itself. Where a plan is helpful is they remind you of the results you want and the course of action and the resources you need. The real value comes from planning.

Plans get created through the action of planning. The planning itself, the act is where you brainstorm options, make decisions, choose a course of action, weigh pros and cons, think critically and creatively. The plan is the result of your thinking and projecting into the future, given what you know currently.

The Value Comes From Planning

The value in creating a plan is all the thought processes that have gone into the creation of the plan. In developing a plan because it causes you to have to take ideas and make them concrete, it causes you to answer questions and make decisions. The value of the plan isn’t making the right decision, it’s making a decision at all. And here’s why you don’t have to “stick to a plan” BECAUSE you can make a new decision.

One of my clients is hosting her first real webinar in a couple weeks. Her plan was to run the webinar on a certain date. And as she worked through the steps of creating the webinar her plans and timeline had to change. She was feeling bad for not sticking to the original plan.

I asked her what sticking to the original plan would have accomplished? Sticking to the plan would have meant running the webinar without the necessary elements in place. She also admits that she would have tortured herself with lack of sleep and an incredible amount of stress and pressure… just to stick to the plan. We discussed what happened when the plan wasn’t the priority, the result of running a successful and profitable webinar without burning herself out was the priority. It turns out the right timing emerged when she remained committed to taking the actions toward that end and keeping her eye on the result she wanted to create and adapting her plan.

Why We Want to Stick

Rigidly holding onto a plan is a surefire sign that there is some emotional attachment to the way things “should” be. The idea of the future that was planned for is not in alignment with reality.  The work of processing this difference needs to take place so that you can adapt to what actually “is”.

An example is that I had a plan to release a new podcast episode every week. After my first two episodes the tech shut down on me and I wasn’t able to record and publish an episode last week. Boy, did that have some emotional attachment to it! I resisted that and there were some feelings I had about that because the reality of what was happening was not in alignment with the idea I had with what should be happening. I should be able to record an episode and release it each week and the reality was that the tech confounded me. I wasn’t able to do that. In the end I had to amend and adapt my plan with this podcast.

To be honest I’ve probably had more plans that I’ve needed to adapt then not. Sometimes they’ve worked out better then planned and I’ve needed to adjust, while other kinks have created massive disappointment.

We plan in small ways and big ways. When I think about planning it can be everything from the plan for my life, down to what I planned for dinner last night. Not every plan has action steps tied to it. Not every plan is outlined on paper, but you will know that you had a plan (even one that you hadn’t identified or articulated or shared) when something changes and you’re not able to adapt, because you’re “sticking” to your idea of your plan.

Trying to Stick to a Plan Can Slow You Down

What I witness is that trying to “stick to the plan” ends up creating uncomfortable emotions and the “shoulds” that then cause women to stop moving forward. It’s like, if this isn’t going the way it was supposed to go then I’m just going to stop here for awhile. Rather than reaching a turning point or a point to evolve and simply recalibrating and continuing to navigate from here they treat it as if it’s a stop sign. Attempting to “stick” to the plan when things have changed creates friction which slows or stops momentum.

Because of course, planning isn’t everything – you have to do what you’ve outlined in your plan, you have to start taking the steps that are in your plan. Because it’s not until you start doing that things will start to unfold. Then you’ll find out things won’t go as planned or they’ll take longer or there will be an interruption or a distraction.

The Importance of Choosing

So, if you don’t have to stick to the plan, then what do you do? It gives you the choice, there’s flexibility to continue with the plan that you originally created, adapt it or abandon it. And you have those choices at every step and stage. No matter whether things are on track or if things have shifted.

You might be wondering how to make a decision about whether or not to stick to your plan, adapt it or abandon it. I have 4 simple questions you can use when something changes.

These four questions can help you be intentional about what you want to do about your plan from here, given what you know now.

Today I would love for you to leave this episode with permission to not stick to your plan when it no longer serves you or when things have changed. Whether or not you want to stick to a plan becomes an active choice. And you can re-engaging in dynamic planning can fill the void when a static plan has become outdated. 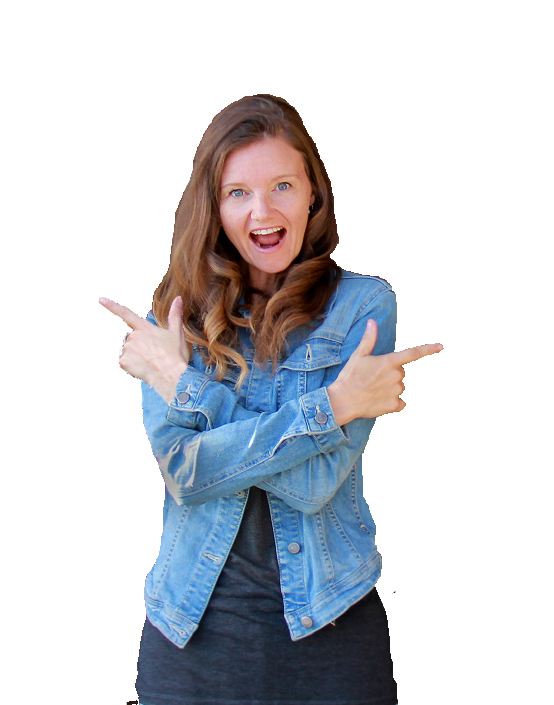